The audacity is jaw dropping, the miscalculation is mind boggling; the insensitivity will only hasten the end of an empire that is already in tatters.

Yes, colonel Abiy Ahmed, PM of Ethiopia, just followed in the footsteps of his role models, Menelik II and Haile Sellasee I, in appointing a transitional “war committee” over Oromia and headed by Amharas. This brings back memory of the royal appointees or “viceroy” (እንደራሴ literally meaning “on my behalf”) of the Menelik and Haile Selassie era.

While the Oromia war has been ongoing for four years, its publicity has been overshadowed by the war in the northern Tigray region of Ethiopia, the aggressors being the federal government of Ethiopia assisted with a sovereign country, Eritrea, bordering with Tigray to the north. The blackout of communications including internet shutdowns in western Oromia also contributed to lessening the full view of the Oromia war from the world. In fact, communications and internet blackouts in Oromia started at least a year prior to the Tigray war that broke out in November 2020.

Repeated pledges have been made in the federal parliament (by PM Colonel Abiy Ahmed), and in the Oromia regional assembly (by President Shimelis Abdisaa) to wipe out the Oromo Liberation Army (OLA) freedom fighters. It should be noted that most of the OLA freedom fighters are the Qeerroo & Qarree youths that ushered in the current regime into power in 2018 by ousting the then brutal EPRDF government that came to power in 1991. Over 5000 Qeerroo & Qareee youths sacrificed their lives in the protest that lasted at least four years.

Colonel Abiy’s government reneged on their promise of dealing with “The Oromo Questions”–a tacit “social contract” with the Oromo people when they assumed power in 2018. Not honoring that promise fuelled the conflict. The conflict has further been exacerbated by Amhara jingoists who take advantage of any conflict for their expansionist policy to enlarge the Amhara region (as happened in the Tigray war), thereby complicating the conflict dynamics.

Horrendous atrocities inflicted by drones and fighter jets, on own citizens, as well as letting loose the Amhara Fano paramilitary criminals and Amhara militia on the Oromo people, will no doubt stand out as notable historical markers.

Together with their leader, Shimelis Abdisaa, the Gobanaas (a term used against Oromo politicians to mean “traitors”) in Oromia Regional Assembly vowed to the extent of “drying the sea to catch the fish”, a metaphor of even wiping out innocent Oromo people to catch OLA freedom fighters among them.

An anathema for any Oromo Assembly representative who took an oath to uphold the interests of Oromo people, but undoubtedly this was music to those promoting the Amhara supremacist and expansionist mindset. It was an open invitation to Amhara supremacist and expansionist groups to help the Oromia Administration in wiping out OLA fighters. This was confirmed by a joint statement of regional presidents Shimelis Abdisa of Oromia, and Yilkal Kefale of Amhara. Prior to that, Shimelis Abdissa donated 100 million Birr to the Amhara region which analysts believe was used to fund the training of the Fano paramilitary criminal groups now causing havoc in Oromia (after their well-documented criminalities in the Oromia special region in Wallo and in the region of Tigray).

As if to put “drying the sea to catch the fish” policy into plan, drone attacks and fighter jets have been used indiscriminately with civilian deaths in several hundreds.

Alas, the oft-repeated pledges by Shimelis Abdissa to wipe out OLA fighters didn’t go to plan. On the contrary, OLA is rapidly growing in strength and breadth within Oromia. The big irony is that the Oromo people feel safer with OLA than with the regional and federal forces, who are burning down dwellings and carry out extra-judicial executions with impunity. The Amhara Fano criminals and Amhara militia committed unimaginable killings in bordering districts with several hundred killed and hundreds of thousands displaced. The Oromia administration as well as federal government never condemned this action and can only be assumed that these atrocities were and still are being committed with the blessings of those holding public offices and supposed to protect the Oromo people.

From Colonel Abiy’s perspective, one thing is clear. Shimelis Abdissa couldn’t live up to his pledge of wiping out OLA, noting that Colonel Abiy uses a derogatory name “Shanee” for OLA, like he uses “Junta” for TPLF. By the way, these derogatory nomenclatures, too, are in the footsteps of Menilik and Haile Selassie, who used derogatory names for ethnic names, “Galla” for Oromos, “Shanqilla” for Benshangul, “Walamo” for Walayitas, and so on.

The assessment of Shimelis Abdissa’s handling of military operations against OLA appears to coincide with escalation of war in Oromia following the respite with the Tigray war in the north. The apparent lull in the northern war is now used to boost the war effort in Oromia, by relocating the Amhara Fano paramilitary groups, the Amhara militia, and the regular Ethiopian army to western Oromia.

It now appears that the newly reconfigured fighting force, yet again on a mission to wipe out OLA, is outside the remits of president Shimalis Abdisa. As if from the textbook of Menelik and Haile Sellasee — historical enemies of the Oromo people (and southern peoples) — Colonel Abiy has just set up a “war committee” over Oromia, to be headed by two Amharas, Mr Temesgen Tiruneh (Director General of Ethiopia’s National Intelligence and Security Service) as the chair of the committee, and Mr Agengew Teshager (Speaker of House of Federation). Other war committee members are Adam Farah (Somali, Vice President of the ruling Prosperity Party) and Mr Tagesse Chafo (SNNP, Speaker of the House of Peoples’ Representatives). The Amhara house of cards over Oromia is complemented by Major General Zewidu Belay (commander of the ENDF Central Army Division) as the military commander for operations in Oromia.

There is no doubt that the world is following the recklessness of Colonel Abiy Ahmed’s regime with great scrutiny. For those directly affected, the impact of recklessness is causing immeasurable outrage not witnessed in modern Ethiopian political history. Horrendous atrocities inflicted by drones and fighter jets, on own citizens, as well as letting loose the Amhara Fano paramilitary criminals and Amhara militia on the Oromo people, will no doubt stand out as notable historical markers.

How the approach the federal government is embarking on brings about peace and unity is absolutely insane, because everything we are witnessing is that of endangering a systemic approach to conflict resolution that the country needs. Indeed, lots have been witnessed in these short years, since 2018, that put the preceding brutal EPRDF regime of 27 years in a better light.  — OT 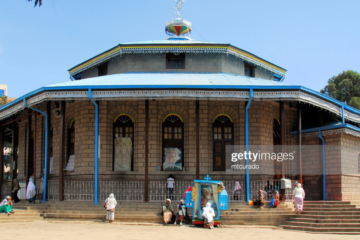 Affiliate Links The Ethiopian Orthodox Church’s focus should have been on theology instead of being an economic and political instrument that provides a way of life. In the name of religious teaching, the Orthodox Church Read more…