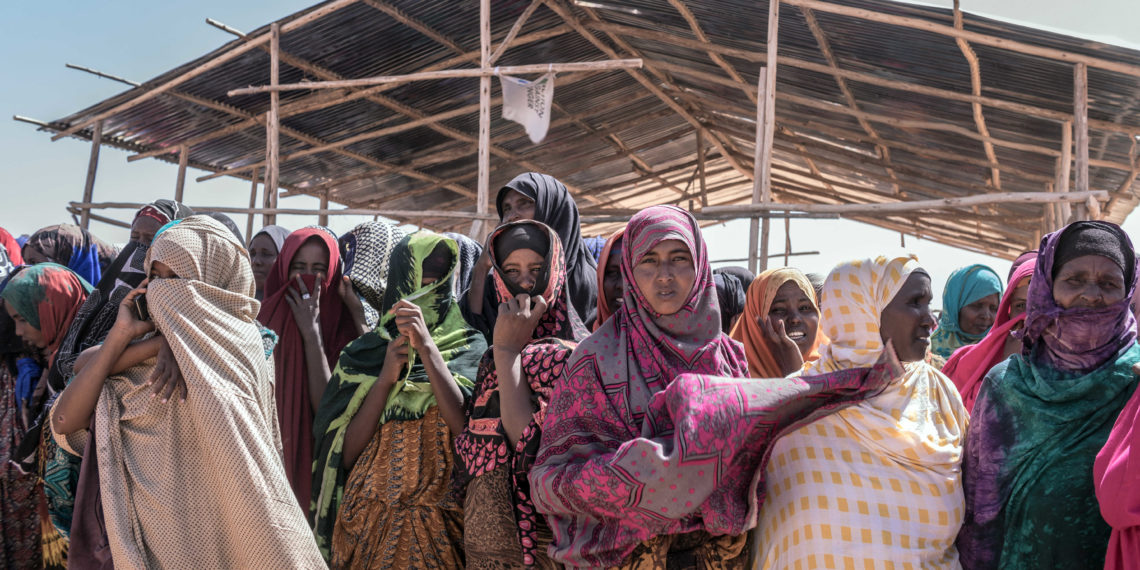 June 2019. The spacious lobby of the Hilton in Ethiopia’s capital Addis Ababa was unusually brimming with confused and harried-looking visitors. Preempting my curiosity, a colleague grimly explained that the new arrivals were a result of the latest in several evacuation announcements issued in South Sudan.

“Every time there is such conflict, Addis is the top-choice destination in the region,” he said. “These people are only the wealthy ones. This means that the rest of Ethiopia will get a new wave of refugees again. But we already have millions of our own displaced.”

He is right. Ethiopia hosts almost 750,000 refugees from all over the region and is set to host more as conflicts worsen. Displaced persons within its own borders, though, far outnumber the refugees. Estimates place the number of internally displaced persons (IDPs) at over 3 million.

Ethiopia last year adopted a refugee law that, among other things, allows refugees to get work permits, access primary education, and obtain drivers’ licenses. The U.N. refugee agency called the law one of the “most progressive refugee policies in Africa.”

As host to some 750,000 refugees from conflict-ridden South Sudan, Somalia, Eritrea, Yemen, and others, Ethiopia passed the law to adopt a more inclusive approach. This should greatly facilitate refugee rehabilitation for Africa’s second-largest refugee population.

The world has been loud in its laudation of Ethiopia’s commitment. However, Ethiopia’s success with refugees is in stark contrast with its underperformance with internally displaced persons. Comparing the two types of displaced groups is unfair, but that doesn’t mean the country cannot catch up with itself.

Refugees are often protected under international conventions, but IDPs are governed by national laws. IDPs constitute a majority of the world’s forcibly displaced, and while they have the right to receive humanitarian assistance, the sovereignty of each nation often leads to unstandardized and substandard relief realities.

Ethiopia is no stranger to the displacement of its people due to bloody strife and natural disasters. During the last decades of the 20th century, most refugees in Africa came from Ethiopia, with approximately 2 million individuals in need of humanitarian aid or resettlement. Ethiopia was a net exporter of refugees.

Today, however, the picture is very different and much direr. In 2018 alone, within mere months, over 2 million people fled their homes to neighboring districts within the country due to violence. The number goes up to nearly 3 million if environment-related reasons are counted. Let’s put this in context. Ravaged by eight years of war, Syria now counts 6 million IDPs; Ethiopia accumulated a third of that in less than one year.

While Ethiopia is now a net importer of refugees, it worryingly has more than its fair share of domestically displaced persons.

On the one hand, it is necessary to stand in solidarity with the international community’s praise of Ethiopia’s efforts to improve the predicament of its refugees. The U.N. High Commissioner remarked upon the unique approach to self-reliance that the refugee bill fosters, as well as the harmonious integration of refugees with locals.

On the other hand, it is equally valid to be critical of the inconsistent and inept response by government authorities. Local officials are accused of being complicit in violence and mass killings, leading media to suggest organized ethnic cleansing. Waves of haphazard forced returns have imposed further cycles of repeated displacement. The international community grows increasingly mistrustful of official efforts to sustainably amend the crisis.

This is Gottiti in Gedeo, on the border with West Guji. There are between 20,000 – 30,000 Gedeos living here. The gov’t refuses to grant NGOs access & they’re being denied food aid as part of effort to force them to return to Guji. Most of the children have severe malnutrition 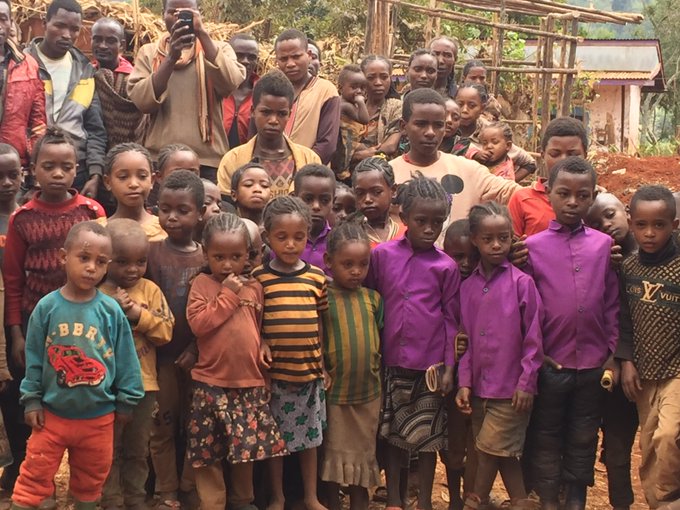 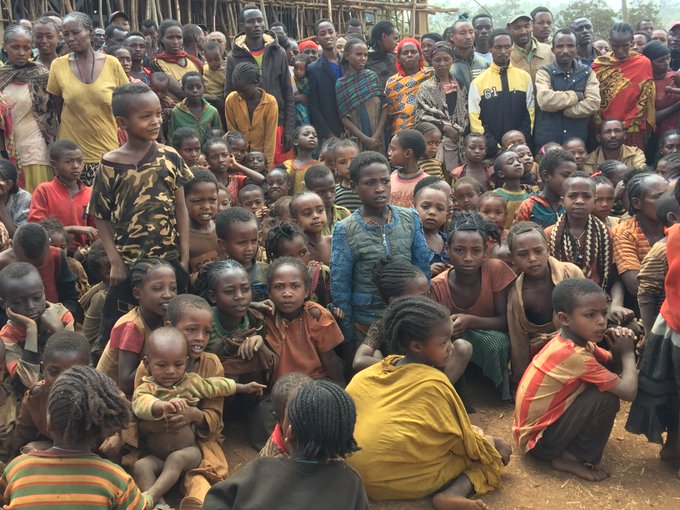 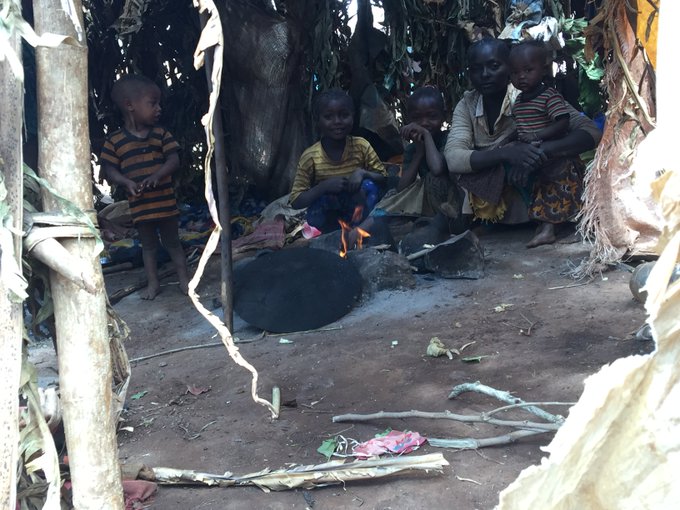 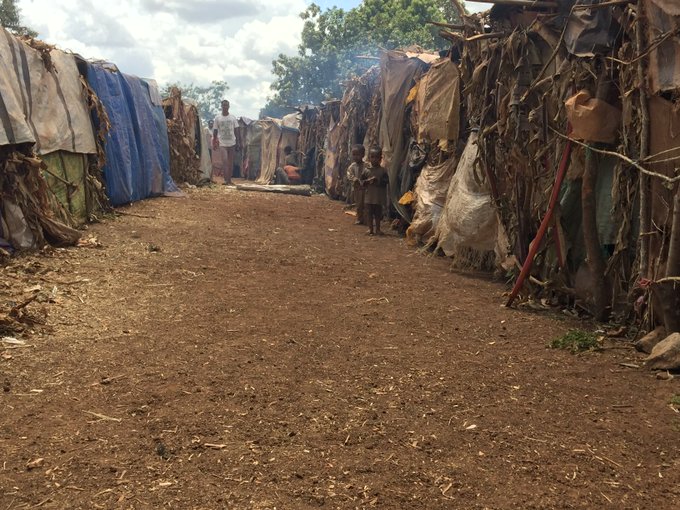 183 people are talking about this

Refugees are multilaterally protected and supported by international consensus and laws. IDPs, however, fall under less unanimous legal jurisdiction. Some conventions govern guidelines to manage them, but by and large, IDPs are caught betwixt and between international relief organizations and federal or local governments.

This poses a challenge. The autonomy of national authorities to govern their own residents and the premature administrative burden often placed on them implies unsustainable outcomes for IDPs.

Fundamentally, both displaced groups are affected by systemic violence, fear of return, loss of livelihood, and post-traumatic disease. Therefore, they are comparable in terms of the urgency needed to address their plight. The paradox thus lies in how the responses are coordinated and implemented.

The peak of Ethiopia’s crisis occurred in the first half of 2018, with about one million displaced minority ethnic Gedeos. It then erupted into a larger problem. Mobs continued to incite violence, lynchings and rapes increased, and entire villages were burned.

By August 2018, the government mobilized a plan that included setting up Emergency Operations Centers (EOCs) at the local level, tracking displaced persons, and working with international NGOs to distribute critical aid. On the surface, these were swift and well-intentioned measures, and the framework was aligned with international principles. However, the actual response greatly contradicted these good intentions. A report by the NGO Refugees International documents this reality.

‘‘The irony is that the Ethiopian government has been receiving international praise. .. But the way it’s treating its own displaced citizens is not only shameful, it’s inhumane,” Refugees International (RI) says. https://bbc.in/2HAOS8G #Ethiopia 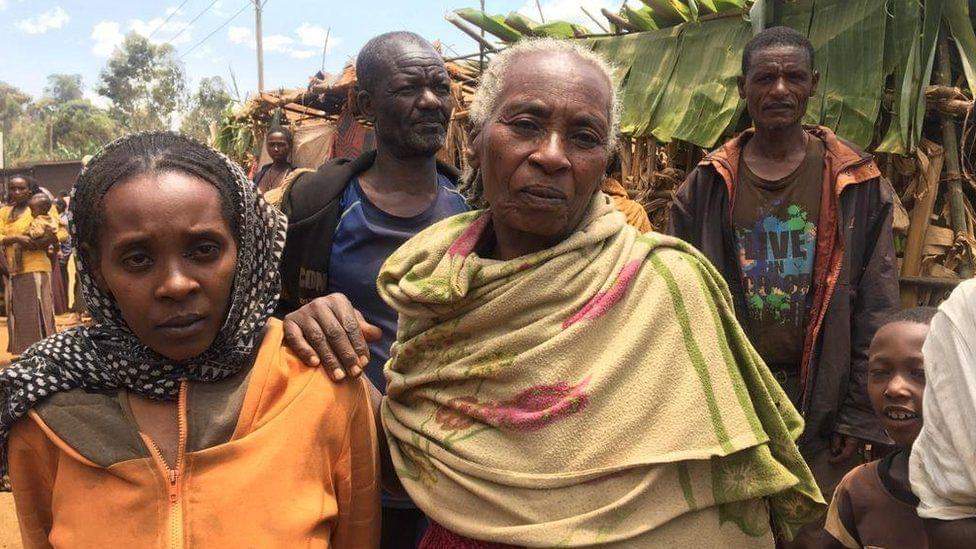 Forced return has caused secondary cycles of vicious displacement. Aid is being withheld as an instrument of blackmail. Survey and monitoring activities are restricted. Communication, transportation, and overall security are patchy, further complicating effective aid distribution. Concerns of overcrowding are preventing the integration of IDPs in new regions.

In reaction, the government issued a Strategic Plan in April 2019 to address internal displacement, but critics claim the plan is neither comprehensive nor detailed.

Though the current conditions seem insurmountable, targeted policy proposals could bring relief. Ethiopia should set up a special unit focused on IDPs to iterate on the Strategic Plan and ensure that phased solutions are indeed durable. Additionally, the country must ratify the Kampala Convention to signal to the international community the nation’s commitment to work through this crisis humanely and dignified.

Return will only be voluntary if IDPs are confident that it is safe. They will only consider returning safe if the underlying triggers of the communal disputes are at least partially addressed. Local integration and resettlement could be successful in Ethiopia, given its recent headway on this for refugees. International organizations are willing and able to help on this front, and working on stronger collaborative efforts are a good place to start.

Given the unparalleled scale and concentrated period, it is no surprise that this crisis has exposed Ethiopia’s limitations in administering the right policy direction. Most countries in the world would have an equally strenuous experience if faced with such a demanding trial. Ethiopia is also contending with widespread economic and institutional reform. Therefore, the country does not only need our patience, but also our continued outreach, encouragement, and support.

Ultimately, Ethiopia’s success with refugees is in stark contrast with its underperformance with IDPs. The country should strive to be praised not only for taking on a novel and inspirational approach towards refugees but also for tackling the enormous IDP emergency. If the country wants to hold onto its rank of Africa’s fastest-growing economy, it cannot afford to lay this issue to the side.

And unfortunately, if not done thoughtfully and adequately, this crisis will not only be a short-term shock but have persistent and long-run implications for Ethiopia’s future.

Disclaimer: The views and opinions expressed here are those of the author and do not necessarily reflect the editorial position of The Globe Post.

Research Fellow at the Growth Lab at Harvard University, where her applied research focuses on economic growth policy and international development

961963 252106Hello! This is my first visit to your blog! We are a group of volunteers and starting a new initiative in a community in the same niche. Your blog provided us valuable information to work on. You have done a marvellous job! 559125

RESEARCH ETHIOPIA: TORTURE AND OTHER ILL-TREATMENT 29 May 2020, Index number: AFR 25/2358/2020 The political reforms introduced in Ethiopia by the incumbent government in 2018 presented the country with an opportunity to break with its Read more…

https://www.theguardian.com/global-development/2020/may/29/ethiopias-security-forces-accused-of-torture-evictions-and-killings-report Prime minister Abiy Ahmed has been lauded for his democratic reforms. But Amnesty International are now urging him to investigate allegations of serious human rights abuses Tom Gardner in Addis Ababa Fri 29 May Read more…

ANALYSIS: THE ROLE OF THE QEERROO IN FUTURE OROMO POLITICS

addisstandard / May 26, 2020 / https://addisstandard.com/analysis-the-role-of-the-qeerroo-in-future-oromo-politics/ “The Oromo protests had significant impact on local administrative structures, temporarily limiting the state’s presence in every corner of the Oromia region.” BY TERJE ØSTEBØ @TOSTEBO Addis Abeba, Read more…