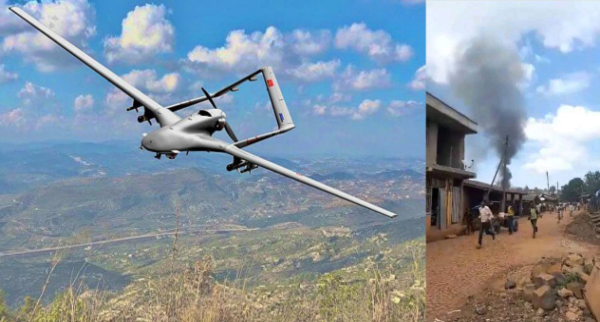 NAIROBI, Oct 27 (Reuters) – Two organisations from Ethiopia’s Oromia region have accused the army of conducting air strikes there in recent days which they said had killed hundreds of civilians, just as peace talks on the separate Tigray conflict were about to start.

Government and army spokespersons did not respond on Thursday to requests for comment on the accusations made by the opposition Oromo Liberation Front (OLF) and outlawed armed splinter group the Oromo Liberation Army (OLA).

Reuters also spoke to a civilian in Oromia, which is located in western Ethiopia and surrounds the federal capital Addis Ababa, who said he witnessed an air raid on Sunday in which about 60 people including his uncle were killed.

Oromia, home to Ethiopia’s largest ethnic group numbering over 40 million, has experienced unrest for many years, rooted in grievances about marginalisation and neglect by the federal government, which has at times cracked down on the region.

The violence there is separate from the two-year war between the federal government and regional forces in the northern region of Tigray, the subject of peace talks mediated by the African Union that started in South Africa on Tuesday. read more

In statements sent to Reuters by text message and email and in posts on Twitter, the OLF and the OLA listed locations in Oromia where they said a series of deadly air strikes had taken place between Thursday of last week and Tuesday this week.

“The combined civilian death toll stands in the hundreds,” said a statement that purported to come from the “OLF-OLA High Command”. It said schools and other civilian targets had been hit.

The resident who spoke to Reuters, who did not wish to be named for fear of government retaliation, said he had seen an air strike on Sunday in West Shewa zone, a district located in the east of Oromia, close to Addis Ababa.

Reached by telephone on Tuesday, he said his uncle and about 60 other people had died in the strike and about 100 had been injured.

“I am just coming back from the funeral of a 16-year-old who was there. We’ve been going to funerals this whole time,” he said, adding that another air strike had hit a nearby school on Monday, but no one had been killed as it was empty at the time.

The resident said there had been sporadic ground fighting in the area over a longer period, but this was the first time people in his village had experienced airborne attacks.

OLA spokesman Odaa Tarbii posted a video on Twitter on Tuesday that purported to show the aftermath of an air strike in West Shewa.

The graphic video showed at least eight dead bodies, several of them with bloody gashes, as well as injured people lying on the ground while others tried to help them. Reuters was not able to independently verify the contents or authenticity of the video.

The OLF is a political party that was banned in the past but returned from exile after Prime Minister Abiy Ahmed, who is of mixed Oromo-Amhara parentage, took office in 2018. The OLA is an outlawed splinter group of the OLF.

Many Oromos hoped that their situation would improve after they helped Abiy come to power, but have since become disenchanted with the prime minister.

While the problems in Oromia are distinct from those that boiled over into war in Tigray, the OLA forged an alliance last year with the Tigray People’s Liberation Front, the party that dominates Tigray. That alarmed the government and intensified a crackdown on the OLA.