Seven people have died in Ethiopia in protests that followed the shooting dead of musician Hachalu Hundessa, well known for his political songs, medics have told the BBC.

Police are investigating his death.

Hachalu’s songs often focused on the rights of the country’s Oromo ethnic group and became anthems in a wave of protests that led to the downfall of the previous prime minister in 2018.

The 34-year-old was attacked on Monday evening when he was driving.

The singer had said that he had received death threats, but it is not clear who was behind his shooting on the outskirts of the capital, Addis Ababa.

Thousands of his fans headed to the hospital in the city where the body of the singer was taken on Monday night.

To them, he was a voice of his generation that protested against decades of government repression.

‘More than an entertainer’

Hachalu was more than just a singer and entertainer.

He was a symbol for the Oromo people who spoke up about the political and economic marginalisation that they had suffered under consecutive Ethiopian regimes.

In one of his most famous songs, he sang: “Do not wait for help to come from outside, a dream that doesn’t come true. Rise, make your horse ready and fight, you are the one close to the palace.”

The musician had also been imprisoned for five years when he was 17 for taking part in protests.

Many like him fled into exile fearing persecution but he remained in the country and encouraged the youth to struggle.

In Addis Ababa, police used tear gas to disperse the crowd outside the hospital and gunshots have been heard in the city where people set fire to tyres. 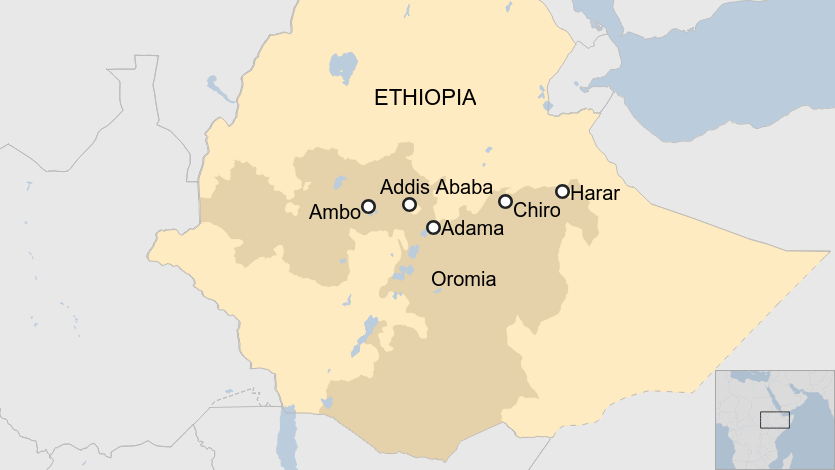 Nineteen others were injured in nearby Dera town, he added.

Meanwhile, in the eastern town of Chiro, two people were shot dead during protests, a medic at the local hospital told the BBC.

The internet has also been shut down in parts of the country as the protests spread in Oromia regional state.

In a recent interview with local TV station Oromia Media Network, Hachalu had said that people should remember that all the horses seen mounted by old leaders belonged to the people.

Prime Minister Abiy Ahmed has expressed his condolences saying in a tweet that Ethiopia “lost a precious life today” and describing the singer as “marvellous”.

The musician’s death and the protests come as political tensions rise following the indefinite postponement of elections due in August, on account of the coronavirus pandemic.

They would have been the first electoral test for Mr Abiy after he came to power in April 2018.

What were the Oromo protests about?

The Oromo, Ethiopia’s largest ethnic group, have long complained of being side-lined.

Demonstrations erupted in 2016 and pressure built on the government.

The ruling coalition eventually replaced then-Prime Minister Hailemariam Desalegn with Mr Abiy, who is Oromo himself.

He has brought in a series of reforms, which have transformed what was considered a very oppressive state.

He won the Nobel Peace Prize in 2019 primarily for making peace with long-time foe Eritrea, but his efforts in transforming Ethiopia were also recognised.

Hachalu’s body was being taken to his hometown, Ambo, about 100km west of the capital, but protesters tried to stop it and insisted that he should be buried in Addis Ababa.

In the eastern city of Harar, protesters have pulled down a statue of a royal prince – Ras Makonnen Wolde Mikael – who was the father of Haile Selassie, Ethiopia’s last emperor.

The statue shows Ras Makonnen, an important military figure and former governor of Harar province in the 19th Century under then-Emperor Menelik II, sitting on a horse.

Spot on with this write-up, I seriously believe this web site needs a great deal more attention. I’ll probably be returning to read more, thanks for the information!|

whoah this blog is excellent i like reading your posts. Stay up the great work! You already know, a lot of individuals are looking round for this info, you could aid them greatly. |

You can certainly see your expertise in the article you write. The world hopes for even more passionate writers like you who aren’t afraid to mention how they believe. All the time follow your heart.|

Hi there, after reading this remarkable post i am too glad to share my knowledge here with colleagues.|